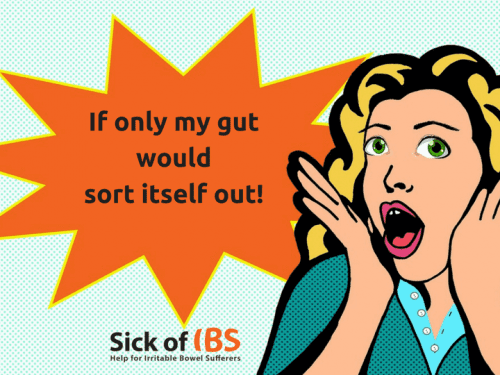 I found myself resenting my body because I was not able to do certain things. Food became a very tense subject, eating out and socialising an ordeal, and the constant pain and bloating just wiped me out.

If only my gut would get the picture and sort itself out.

Then I could get on with what I had to do to be successful.

What Survivor taught me

I had an AHA moment when I was watching Survivor one night.

Teams were running the first leg of a race carrying a heavy bag on their shoulders.

The person who won the first leg had to give their bag to another team member. Then they ran the second leg of the race with (or without) those extra bags of weight. And then a 3rd and final leg.

When I saw one poor guy who had 3 bags on their shoulders alongside one who had none, the picture became very clear.

It was impossible for that person to win. The bags were just dragging him down too much, despite all his best efforts to keep going.

I realised that this was me with my IBS, fighting hard but not getting there.

This is where I went wrong for so many years.

The #1 mistake we are all making

I didn’t realise it, but wasn’t doing much to help my health, just brushing it aside as a major annoyance. Not realising that my body and my health were not some accessory, but actually a fundamental part of me.

Hoping that my IBS would just go away…

Good health is worth everything.

Because when we trade it off for more money, more things, more success, it’s a losing game.

We can’t enjoy ANYTHING if we are tired and in poor health.

#2 Not accepting we have IBS

The first step to healing from IBS is ultimately to accept that you have it, that you are sick.  But  do know that you can get well if you are really motivated.

To do that, you have to start by making your well-being a priority every day.

YOU are the major player on your team.  A football player who is injured doesn’t play. He takes time to heal before playing another match.

#3 Make yourself a priority

Even if you can’t just drop everything, taking some time every day to look after  yourself is a good start. Taking even ten minutes or half an hour, to really relax (without outside stimulation) and tune into your body is vital and will pay over time.

This article gives you 10 ideas of how to start..

When you stop doing and thinking, you leave a space for feeling. You will start to feel where the tension is in different parts of your body (not just your gut) and experiment with how you can ease that tension. Deep breathing, massage and mindful meditation can be valuable allies.

Gradually you may be able to put down some of those heavy bags and begin taking the weight off your shoulders.

It’s hard to start because it requires extra effort, but it’s totally necessary.

HAVE YOU SEEN THESE?

We use cookies to ensure that we give you the best experience on our website. If you continue to use this site we will assume that you are happy with this.Ok