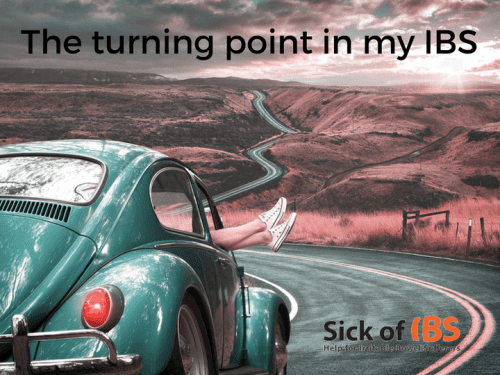 That holiday, I was sat next to the pool, bloated up like a beach ball, feeling like a wreck with my IBS.

I had had IBS for about 20 years, and my specialist told me I would probably have it for the rest of my life.

I couldn’t digest any of the treatments I had been prescribed. They just made me feel worse.

And I had no solutions.

I didn’t know it back then, but something vitally important was about to happen, the turning point in my IBS.

The Turning Point in my IBS

I had bought a few women’s magazines to read by the pool. And in one of those magazines were the usual articles on well-being. As I skimmed through the pages there was one on essential oils, and one surprising article about a man that lived at the turn of the 20th century.

From the article I learned that this Frenchman had lead an extraordinary life. He was known as the man of 80 trades because his intellectual agility, curiosity and imagination led him to excel in a wide range of different trades. As well as being an accomplished inventor, mechanic and electrician, and architect he became a specialist in cellular biology and healing. His success came from his willingness to challenge existing solutions and experiment. In fact, he lived his entire life as one great experiment,

He developed and made known a method of acupuncture that could relieve a wide number of common complaints, from back ache to digestive problems. It is still used by many chiropractors today. Knap learned about the meridians in the body and by experimenting learned which points were most effective. He stimulated a set of pressure points every day and by doing so kept himself fit and healthy. He also was careful to exercise, eat a nourishing diet and get a good night’s sleep.

Knap lived until he was 80 years, happy, fit and in perfect health.

Living life as an experiment

I read that article several times during that holiday, and it profoundly inspired me.

I realised that I was waiting to be told what to do about my IBS. However, it was unlikely that a doctor would ever help me out it.

Here was a man who had led an extraordinary life despite losing his parents at the age of 17, and at a time when internet didn’t exist.

He didn’t wait for permission. He had probably never seen a doctor in his life. And he used his capacities to be creative, inventive and was willing to carefully experiment.

The article also got me to understand that he consciously did something for his health every single day. And that it was this repetition that got him results. That was a valuable lesson, and the turning point in my IBS and my attitude towards it. It was my responsibility to myself to do something to improve my IBS consistently, every single day.

It had to become a priority. I had to commit to it.

So I started to open up and experiment more. I looked into pressure points and tried them out on myself. And I found some of them useful. Then I started considering what I could to improve my health, and walked towards my goal every day, trying out many wierd and wonderful ideas in the process, and learning a great deal.

Research on digestion helped me understand Candida and I sought out an effective natural remedy which really improved my digestion.

After that, I opened myself up to not only the mind-body connection, but the connection between the mind, body, emotions and energy.

I looked into personal development, and The Man Who Wanted to Be Happy

by Laurent Gounelle inspired me too, introducing me to neuro-lingustic programming.

Finally I began to understand the connection between my IBS symptoms, my life and my experiences.

I sought out tools and techniques in each of these areas that would allow me to recover.